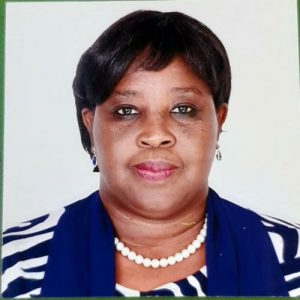 Pharm. Mosunmola Olufunmilola Beckley was born on 24th January 1963. She attended Ago-Ijaiye Primary School, Ebute Meta between 1969 to 1974 and later

Concluded  her primary education at St. Agnes Primary School, Maryland in 1975. She proceeded to Lagos State Government College, Agege between 1975-1980 where she obtained her West Africa School Certificate.

She gained admission in to the then University of Ife (now Obafemi Awolowo University) Ile-Ife, Osun State between 1980-1984 where she obtained  B. Pharm Hons. (Second Class Upper) and later M.Sc Pharmaceutical Chemistry at the University of Lagos between 2002- 2003.

She Joined the Lagos State Public Service on the 21st July 1986.

NYSC at the Staff Clinic Complex of the Administrative Staff College of Nigeria (ASCON), Topo Badagry between  1985-1986.

Joined the Lagos State Public Service on the 21st July 1986.

Deployed to the Headquarters to assist the Director of Pharmaceutical Services. She was involved in the general administration of pharmaceutical services in the State from 1995- July, 1999.

Deployed to Lagos State Medical Stores from Jan 1991 – July, 1995 and redeployed between August 1999 – July 2001 where she gained expertise knowledge in Drug Stores and Inventory Management;

Training of Pharmacy Interns/NYSC posted to LSMS, Oshodi in Stores and Inventory Management.

esponsible for the quality assurance of medicines circulating in State health facilities.

Deployed as Director/Head of the State Pharmaceutical Inspectorate Unit .

Roles and Responsibilities as the Director and Head of the Inspectorate Unit: Member of the State Pharmaceutical Inspection Committee and Patent and Proprietary Medicine Vendors.

Licence Committee and Member and Secretary of the State Task Force on Fake, Counterfeit and Unwholesome Processed Food:

Responsible for inspection and control of Pharmaceutical premises for purpose of registration and renewal of licences.

Monitoring of established pharmaceutical premises to ensure compliance with rules and regulation;

Enforcement activities on illegal drugs shops and all premises engaged in production/sale of fake drugs.

Capacity building of Patent Medicine Vendors on the scope of their operation and updates on new developments applicable to their scope.

Roles and Responsibilities as the Director of Pharmaceutical Services (DPS):

Directing the provision of Pharmaceutical services through identified organs and structures of Government.

Developing performance standards, objectives, roles and responsibilities for staff in the directorate.

Ensuring that pharmacists in the State (both Public and Private) comply with the Pharmacists Council of Nigeria regulations, in alignment with Lagos State Government’s policies in the health sector.

Provision of effective linkage between State and the FMOH, and Implementing Partners (IPs) and Agencies on pharmaceutical matters.

Representing the State Government on the Governing Council (GC) of Pharmacists Council of Nigeria (PCN), through attendance at statutory quarterly meetings, with recommendations for implementation of decisions taken at these, and other related meetings.

Serves as Pharmaceutical Consultant to other directorates and agencies of the Ministry of Health, and wherever same is required.

Reduction in the proliferation of illegal drug shops.

Reduction in the incidence of fake drugs circulating in the state by dislodging illegal drug shops which have been established havens for distribution of fake drugs.

Capacity building of licenced vendors to safely discharge their responsibilities within the scope of operation.

Behavioural qualities: Application of due process in implementation of roles and responsibilities; Integrity; fairness in conflict resolution – an essential common factor in inspectorate activities and human relationship generally; consistency; self-respect and respect for others; Honesty of purpose; courage to advise government without bias contentment; Team leadership.

She has benefited from several in-house trainings, management courses and professional courses as well.

Recipient of 2017 long service award having spent 31 years. She would have spent 35 long and rewarding years in the Public Service by the 21st July 2021.