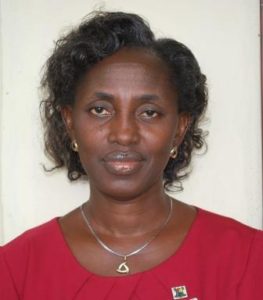 Dorcas Olukemi Shonibare was born on 25th September, 1965 in Lagos.  She began her Primary Education at Methodist Primary School Obele-Odan, Surulere and proceeded to New Era Girls Secondary School Surulere from 1977 – 1982.  She gained admission to School of Nursing University College Hospital Ibadan in April, 1984 and obtained the State Registered Nurse Certificate in 1987.  She had in-service training in Lagos State School of Midwifery, Awolowo Road, Ikoyi from 1993 – 1994.  Mrs. Shonibare bagged the first Degree in Nursing Education from University of Ibadan in 2001, furthered her education with a Master degree in Public Administration in 2006 from Lagos State University and a Master degree in Maternal and Child Health Nursing from University of Ibadan, Oyo State.

Dorcas commenced her Civil Service Career with Lagos State in January 1990 as a Staff Nurse in General Hospital Lagos.  Sequel to the Completion of In-service-training as a Midwife, she worked in Lagos Island Maternity Hospital and the then Ayinke House, Ikeja.  Her performance as a student Midwife paved way for her to be identified as an instrument good enough to impact knowledge and skills, hence she became a clinical instructor from 1995 – 2001.

She is an Associate Member of the Nigerian Institute of Management.

Olukemi Shonibare was given an Award of “An Excellent Nurse” by the Association of West African Nursing Students in August, 2013.

Mrs. Dorcas Shonibare is married to Dr. Dada Olu Shonibare and the Union is blessed with children.

Broadly her purview of duties and responsibilities as Director of Nursing in Lagos State includes:

(i)   Supervision of Nurses in Health Institutions, Industrial, Public and Private Settings.

(ii)  Coordinates all Nursing matters in the State Ministry of Health

(v)  Oversee the planning, implementation and evaluation of Mandatory Continuing Professional Development Programme and other capacity building programmes for Nurses in Lagos State.