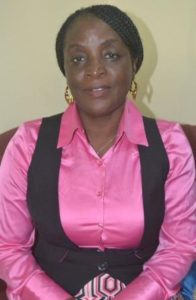 Adeola Olubukola Salako nee Adenuga was born at Agege Lagos State in 1964.  A native of Ijebu Ode Ogun State, she began her educational career at St. Andrews College Demonstration School, Oyo in 1970. She proceeded to Baptist Girls High School, Osogbo and later to Osogbo Grammar School, Osogbo where she obtained her West African School Certificate in 1978. She later went to Remo Secondary School, Sagamu where she got her Advanced Level Certificate in 1980. She was at University of Ibadan between 1981and 84 where she graduated with a Second Class upper division in Language Arts. Her NYSC was with Plateau State Printing Corporation owners of Nigeria Standard Newspaper where she was the Editor of the Women’s page.

Thereafter she proceeded to University of Ibadan for a Master’s programme in Communication and Language Arts while joining the academic staff of the Department as a Graduate Assistant in 1986. In 1987, she became as a part time feature writer for Nigerian Vanguard writing on gender related issues.

She left full time academic and worked briefly for the defunct Lagos Horizon before obtaining employment with Lagos state Local Government Service Commission as Information Officer in May 1990.

She worked in various Local Government areas such as Eti Osa, Ojo, Kosofe, Agege, Amuwo-Odofin: establishing and pioneering the Information Units in most of them. She was deployed to the Lagos State Civil Service in 2006 and was  posted to the State owned Television station, Lagos Television as Head Corporate Affairs and later rose to become the Director of Corporate Affairs.

In 2008, she enrolled and successfully completed a 3 months Certificate course in Media Entrepreneurship (CME) in Lagos Business School under the auspices of Pan African University, Nigeria. She was later posted to Ministry of Health as Director Public Affairs in July 2015.
Adeola is happily married with children; she is a lover of children and is always engaged in Church activities in her spare time.