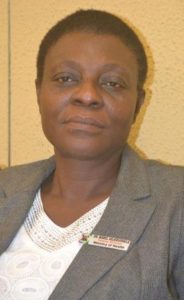 Dr. Adjekughele Idiegbea was born on the 2nd of April, 1961. An indigene of Edo State;  She studied Medicine at the University College Hospital, University of Ibadan, Oyo State, where she was awarded the Medical Certificate of Bachelor of Medicine and Bachelor of Surgery (MBBS) in 1987. She was also awarded Master in Public Administration Certificate at the Lagos State University (LASU), Ojo in 2009.

On graduation as a doctor in 1987, she had her housemanship at the Central Hospital, Benin City, Edo State between October 1987 and November 1988 and went through a rotational internship in Surgery, Paediatrics, Obstetrics & Gynaecology, and Internal Medicine. She did her National Youth Service Corp posting at the Central Hospital, Ebute Metta, Lagos under the Railway Corporation between 1990 and 1991.

Dr. Adjekughele began her Civil Service career at the Lagos State Ambulance Service (LASAMBUS) in July 2001 and was deployed to the Lagos State Surgical Emergency Service (LASEMS) Department at the then General Hospital, Ikeja (now Lagos State University Teaching Hospital) in September 2001. She also worked at the Medical Emergency Department of the Hospital before returning back to LASAMBUS in 2004. She was appointed the acting Executive Secretary of the Health Facility Monitoring and Accreditation Agency (HEFAMAA) in July 2015 and was confirmed into the same position in a substantive capacity in October of the same year.

Dr. Adjekughele is blessed with children and a grandson; and she likes reading, listening to gospel music and cooking at her leisure time.