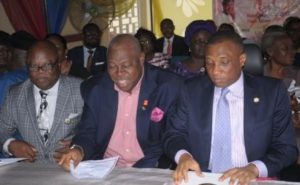 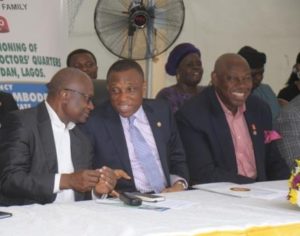 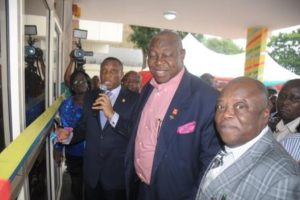 Lagos State Governor, Mr. Akinwunmi Ambode on Thursday commissioned the newly reconstructed 10-Storey Doctors Quarters at General Hospital, Lagos and the refurbished Onikan Health Centre, just as he reassured Lagosians that the train of infrastructure development and rehabilitation is still on the move.

He also used the occasion to restate his administration’s determination and commitment to reduce avoidable disabilities, maternal and child morbidity to the barest minimum across the State.

“Since the inception of our administration which will be two years in a couple of weeks, we have committed ourselves to infrastructural renewal and development that will enhance productivity and boost the morale of public servants to improve service delivery to members of the public,” he said.

“I have confidence in the ability and capability of our health care personnel to deliver excellent service comparable to what obtains in developed countries. As we strive to upgrade our health facilities with the provision of modern infrastructure and equipment, we shall continue to give due attention to issues of welfare and human capital development” the Governor added.

He explained that the present administration has continuously endeavoured to raise and sustain the confidence of members of the public on its healthcare service delivery while ensuring avoidable disabilities, maternal and child morbidity will be reduced to the barest minimum.

The Governor described the Onikan health centre as a foremost medical facility established by the Government which has however been overstretched by population growth, adding that its upgrade became necessary following the standard policy of a functional secondary healthcare facility in each Local Government Area of the State as advocated by the Federal Government.

He informed that the rehabilitated Doctors Quarters consists of 29 apartments with self-service quarters attached to provide accommodation for medical personnel and their families.

Ambode listed other additional benefits derivable from the rehabilitation of the structure as the 24 hours availability of specialist medical personnel to attend to patients on admission especially in emergency cases.

Earlier in his welcome address at the Onikan Health Centre, the State Commissioner for Health, Dr. Jide Idris stated that the State Government will introduce the Health Insurance scheme this year so that all Lagosians can easily have access to medical care throughout the State.

He emphasized that Government plans to renovate all the doctors’ quarters in all the General Hospitals across the State and build more where necessary to enhance the productivity of medical personnel.