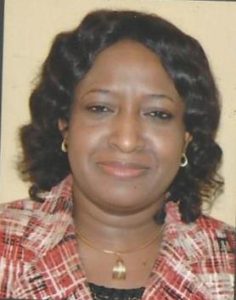 Dr. Olufunmilayo Shokunbi was born in Lagos on February 10th, 1969. She started her primary education at the Omoleye Children School, Palm-grove Lagos from 1974 – 1979.

Dr. Funmi Shokunbi began her civil service career at the General hospital, Ikeja as a Medical Officer in 1998 before she was posted to General Hospital Ajeromi where she was the Head of Ophthalmology Department from 2004 – 2009 where she was later transferred to the Ministry of Health in 2009 to assist in coordinating the Lagos State Blindness Prevention Program.

She was the 2013 Lagos State Health sector productivity Award recipient. She was appointed as the Head, Lagos State Blindness Prevention Program in 2012.

Dr. Olufunmilayo Shokunbi has attended many courses and conference on management and Leadership.

Dr. Olufunmilayo Shokunbi is a member of the Nigeria Medical Association, West African College of Surgeons and Ophthalmological Society of Nigeria.